Apple’s annual developer conference, WWDC, is just around the corner. As a developer of iOS apps and heavy user of macOS, this is always an exciting time of the year. There is talk about iOS apps being able to run on macOS and dark mode coming to iOS. Before I get busy with implementing these from next week on, it’s fun to take a step back and think about what I would like to see Apple do and let developers do. I’ll start with my hopes for Siri, and then more wishes from a more (power) user perspective and then from a developer perspective.

Siri as a voice assistant is not overly exciting to me personally1. I use it mostly for simple things like setting timers and reminder, occasionally controlling my music, checking the weather, turning on my coffee machine and checking the battery of my car; but for most other things I turn to using my hands and having visual interfaces.

However Apple is making Siri slowly into more than a voice assistant; turning it more into a pro-active assistant that knows what you do when, and then gives you help by itself before you explicitly ask for it. This I find very exciting. So far Apple has only taken little initial steps down this path like predicting what app you’ll use next, or what location you’ll go to next and telling you traffic going there2. Exciting is what else Apple could do with this and what developers could do with it once Apple opened up these predictions.

From apps to actions 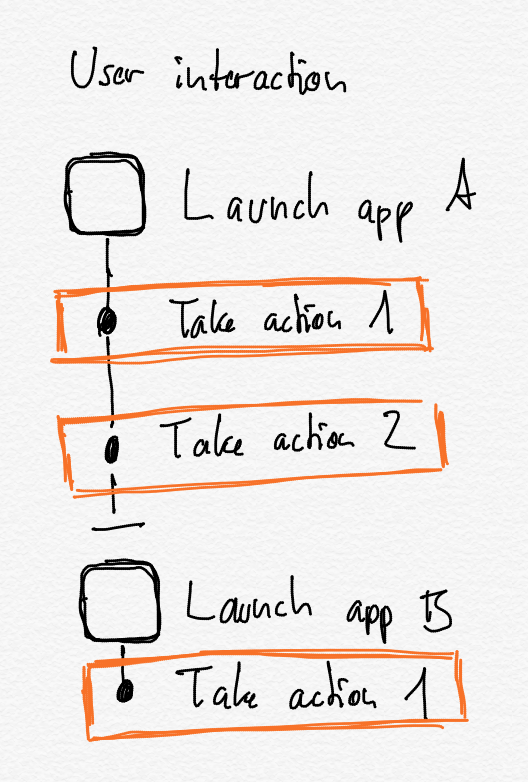 At WWDC 2018, Apple introduced Siri Shortcuts, which brought automation capabilities to iOS by letting developers expose what individual actions a user is doing in their app back to the operating system and also when the user’s are doing them. This enabled two things:

The first of these was a great way forward for automation on iOS, especially in combination with the Shortcuts app that let’s users string together individual actions — just look at the iOS automation content on MacStories, the Automators podcast, and the many examples on Sharecuts. And I very much hope that Apple iterates this by allowing app developers to make those actions dynamic by letting users specify inputs and handle outputs coming from them.3

The second could be really interesting,4 when you consider that Apple could not just predict individual actions but also sequences of actions — including spanning multiple apps or even across devices5. In essence, Siri could learn repetitive actions that you do, and suggest entire multi-step Shortcuts for you to run, which you then can also customise further. This could be a great way to get people into Shortcuts and automation in general!

My second wish related to a pro-active Siri is that Apple opens up the predictive smarts of Siri. It would be fantastic, if developers could, say, get access to predictions for your next destination (and departure or arrival time) or a contact you’re likely to interact with. Currently developers have to track you in the background or figure this out themselves by looking at your past usage of their apps.

Tapping into Siri’s predictions through an Apple-provided interface, would have several advantages:

I would love to work with these predictions and see what other developers would come up with.

Lastly, here’s an unordered grab bag of my other wishes:

Fingers crossed, and here’s to exciting announcements. Happy WWDC to anyone attending!

Update from 13th June: The results are in

Things I didn’t know I wanted: